This year I will be producing a lot more video.

They’ve said for the past few years, especially last year, that by 2020, 80% plus of content consumed online will be video. We’ve reached 2020. So it’s about time that we start taking video a little bit more seriously. So I’m planning on doing a lot more and I know a lot of my clients are starting to do a lot more video as well.

That being said, I’m getting more and more design requests for YouTube thumbnails. People are starting to take their YouTube channel a little bit more seriously. So this months theme is all around YouTube, whether that be creating your YouTube thumbnails, your YouTube channel artwork, or any graphics that you can start to incorporate within your videos to make them stand out and to take them to the next level.

With that being said, I’m here today to give you a few quick tips, to help you start to think about your YouTube thumbnail and what they might look like in order to help them stand out and attract new viewers.

So your thumbnail is the little picture that gives an idea of what your video is going to be about. The idea of them is to entice the viewer to watch and consumer your content, ultimately increasing your viewers, your numbers of subscribers and fans. They’re becoming more and more important because it is that little picture that will entice the viewers and make your video stand out from the others. In fact, it said that video creators and content creators are actually spending more time on their YouTube thumbnails and the way their YouTube channel looks than the videos themselves. So that says a lot and says how important these little graphics are.

So here are a few quick tips on things to think about when you’re creating your thumbnail.

So first up, we’ve got colour. So colour is really important when it comes to the thumbnail. This is what will help it stand out from all the rest. Think about your brand, but think about using bright colours or two contrasting colours. These are things that we that will grab the viewers attention and we want to entice them into watch the video. So make them stand out, make them bright, make them bold.

Incorporating images into your thumbnails makes a lot of sense because you want to give a bit of context to what your video is all about. So this could be a screenshot from the video itself, it could be a cutout of the person who’s in the video to give a bit of personality and a bit of context to the actual content. One thing if you are thinking about using people especially, is some of the best YouTube Thumbnails and some the most successful ones use crops of people’s heads so you get close to the emotion and use people with bigger facial expressions. Having a person in your thumbnail automatically creates that person to person bond, so people can resonate a little bit more with the thumbnail. So big emotions and close ups work really well if you’re using people within your thumbnail.

If you’re going to use a screenshot of the video itself, use something that explains what the video is about. Use something that adds a bit more depth, another layer to your thumbnail. People have used stock pictures in the past but if you can use content from the actual video again, you’re going to entice the viewer more. The whole idea is that you want to attract viewers to your videos, the more you can do that this thumbnail stage, the better.

The next one is text. So adding text to your thumbnails can be really helpful. Again, it adds another layer of enticement and gives viewers an idea of what it’s all about. The one thing I’d say here though, is remember, some of these thumbnails are seen at tiny sizes, especially on mobile, so don’t fill the whole area with lots of text. Use the area sparingly. Use three or four words max. This is a great chance to give an idea of what the video is about and it doesn’t have to be the headline that’s written underneath. Use it as an extra space to add a bit more context to a video. Use three or four words and use them in a larger font so it’s more attractive to the viewer, they understand what it’s about, enticing them quicker. Again, because thumbnails are seen at small sizes, sometimes you want to use a larger and maybe bolder font. Nothing to script and nothing too intricate and decorative. You want viewers to be able to understand straight away what the video is about and this will help you stand out from all the other videos on YouTube that they’re looking at under their search.

And the second to last little tip is space. So YouTube puts a timestamp in the bottom right hand corner, which gives the viewers an idea of how long the video is. This is really important because some people will have 10 minutes spare, some will have half an hour spare. It gives them an idea of the length of video they’re going to watch. So make sure that when you’re creating your thumbnails, and you’re putting together the pictures and text, that you avoid this little space in the bottom right hand corner. It means then the timestamps visible, but also means that any important information such as the context of the video, and what it’s about, doesn’t get lost behind that timestamp. On the playlist page, especially, the right hand side gets covered. So if possible you might want to place all of the most important information on the left hand side. 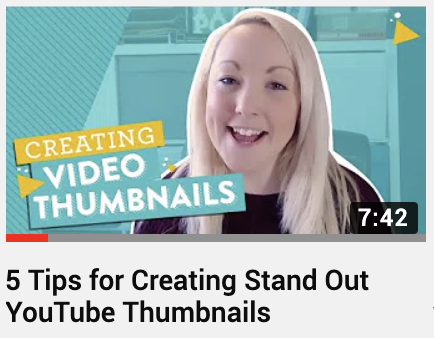 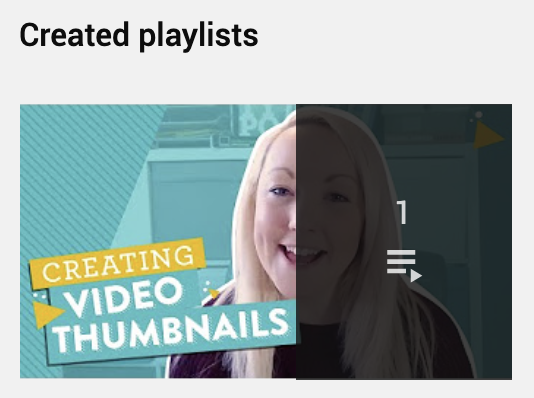 And very lastly, is consistency. Once you’ve come up with your YouTube thumbnail template, there might be two or three depending on the types of videos you share. Be consistent with it. When you look at a full consistent YouTube channel, it can be really effective, and it will mean that when people are scrolling through through videos in the future, they’ll be able to spot yours out from anyone else’s. Using the same style of image, the same text, the same colours, it can really make you stand out from all the other videos on there. It makes you look more professional and looks like a lot more effort has gone into your videos. Again, the ultimate aim of getting more views on those videos and to build up your audience.

Take a look at Andrew and Pete’s channel for a great example! 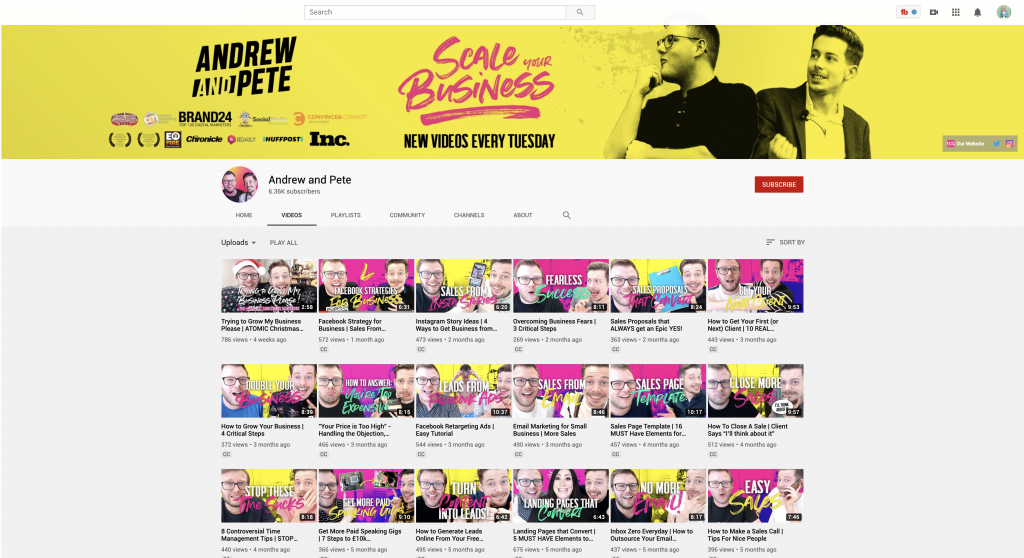 I hope that was helpful. If you’ve got any questions, feel free to drop me a comment below or get in touch and I will see you on the next video.

Posted in Visual Branding and tagged Video, video marketing, YouTube
← How to Increase Blog Engagement with Visual UpgradesWhat are the best sizes for my YouTube graphics? →

This website uses cookies to analyse traffic and enhance your user experience. By using this site, you agree to it's use of cookies on your device. For more information, please read ourPrivacy Policy Accept

This website uses cookies to improve your experience while you navigate through the website. Out of these, the cookies that are categorized as necessary are stored on your browser as they are essential for the working of basic functionalities of the website. We also use third-party cookies that help us analyze and understand how you use this website. These cookies will be stored in your browser only with your consent. You also have the option to opt-out of these cookies. But opting out of some of these cookies may affect your browsing experience.
Necessary Always Enabled
Necessary cookies are absolutely essential for the website to function properly. This category only includes cookies that ensures basic functionalities and security features of the website. These cookies do not store any personal information.
Non-necessary
Any cookies that may not be particularly necessary for the website to function and is used specifically to collect user personal data via analytics, ads, other embedded contents are termed as non-necessary cookies. It is mandatory to procure user consent prior to running these cookies on your website.
SAVE & ACCEPT
Scroll To Top